A poignant response to the shootings in Pittsburghâ€¦. From 1790 and signed by Gorge Washington 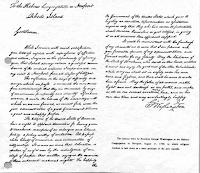 As a son of Pittsburgh who still claims it as my hometown, I have been deeply saddened  and angered by the news of the violent madness that occurred at the Tree of Life Synagogue in the Squirrel Hill neighborhood last week.  I was devastated to hear of the eleven shooting deaths, and the number of individuals wounded, all the work on a madman who somehow thought that this act of anti-Semitic violence was part of his patriotic duty.  There are no words to bring enough comfort for the families of those lost, no indignation great enough to express my, and broadly our revulsion of this act of hatred and violence.
We live at a moment in our country when a political language of fear, hatred, mendacity, distrust and violence has replaced the concepts of common decency, fact based debate, and neighborly civility.  I am confident that the silent majority of this country is more than annoyed or embarrassed by this trend and we need to stand up, and take action in our own day to day language to find a more thoughtful, balanced , tempered and reasonable vocabulary for our civic dialogue.
It is in that spirit that I share the following inspiration; the letter that George Washington wrote to the Jewish community in Newport Rhode Island in 1790. Early in my career, I held a sales meeting in Newport at The Viking Hotel, very close to the Touro Synagouge, one of our nationâ€™s oldest dating from the 1760â€™s.  It was there, back in the late 90â€™s when I first heard of the famous â€œWashington Letterâ€ and had a chance to read a copy at that time.  A model of governmental ideals, religious liberty, and beautiful civic language, this letter has provided inspiration to many for centuries, and for me has never been more applicable than now!
Take a moment and read the letter, copied below from the Touro Synagouge website, http://www.tourosynagogue.org, and find a way to appreciate the words AND take action to apply them today.  I took the liberty to put in bold font a key paragraph that has affected me deeply, the core sentence being

â€¦â€for, happily, the Government of the United States, which gives to bigotry no sanction, to persecution no assistance, requires only that they who live under its protection should demean themselves as good citizens in giving it on all occasions their effectual support.â€
Let us â€œgive bigotry no sanction,â€ let us give â€œpersecution no assistance,â€  and instead work hard in our actions and our language to be â€œgood citizens,â€ working TOGETHER to give our country and all our neighbors â€œeffectual support.â€
George Washington’s Letter
to the Hebrew Congregation of Newport

Gentlemen:
While I received with much satisfaction your address replete with expressions of esteem, I rejoice in the opportunity of assuring you that I shall always retain grateful remembrance of the cordial welcome I experienced on my visit to Newport from all classes of citizens.
The reflection on the days of difficulty and danger which are past is rendered the more sweet from a consciousness that they are succeeded by days of uncommon prosperity and security.
If we have wisdom to make the best use of the advantages with which we are now favored, we cannot fail, under the just administration of a good government, to become a great and happy people.
The citizens of the United States of America have a right to applaud themselves for having given to mankind examples of an enlarged and liberal policyâ€”a policy worthy of imitation. All possess alike liberty of conscience and immunities of citizenship.
It is now no more that toleration is spoken of as if it were the indulgence of one class of people that another enjoyed the exercise of their inherent natural rights, for, happily, the Government of the United States, which gives to bigotry no sanction, to persecution no assistance, requires only that they who live under its protection should demean themselves as good citizens in giving it on all occasions their effectual support.
It would be inconsistent with the frankness of my character not to avow that I am pleased with your favorable opinion of my administration and fervent wishes for my felicity.
May the children of the stock of Abraham who dwell in this land continue to merit and enjoy the good will of the other inhabitantsâ€”while every one shall sit in safety under his own vine and fig tree and there shall be none to make him afraid.
May the father of all mercies scatter light, and not darkness, upon our paths, and make us all in our several vocations useful here, and in His own due time and way everlastingly happy.
G. Washington
« Vote for America; voting is the lifeblood and oxygen that our democracy needs now! » Leaders, don’t underestimate your impact!