It has been eight weeks since we closed on the purchase of Bolthouse Farms, and what a wild ride it has been!  The business is in rough shape and needs a lot of work.  The organization is in flux, and has been through a lot over the past few years, and the team and our culture needs a lot of nurturing.  I think across the board there is a feeling of excitement and a recognition that there is a ton changing in every aspect of our company; so when I say its been a wild ride I do think it’s a bit of an understatement!!
Immediately in week one, I â€œre-institutedâ€ my â€œweekly performance management callsâ€, where we review the metrics of the business (every Tuesday) and review the key issues and focus points for the company broadly, and key themes by department. This is a process/discipline that I have written about in a number of essays (https://fylegacy.blogspot.com/2014/09/beating-cadence-drumbeat-of-performance.html) and an approach that worked very well for me in my last â€œstintâ€ at Bolthouse Farms, 2009-2015!  This process/discipline may seem boring or monotonous to some, but â€œbeating the drumbeatâ€ of a business with regular reviews of performance, and a regular â€œrefocusingâ€ on the key issues is ALWAYS productive and will ALWAYS be part of my playbook!
It was on one of these weekly calls that I was reviewing the every growing list of important & urgent priorities on our action list when I shared the concept of â€œalacrityâ€ with the team with little pre-planning.  We have so much on our plates right now and while energizing, it is really hard work and as a sample of one I am working the hardest that I can remember across my career!  It seemed critical to me to try to bring energy and positivity to the work at hand for me personally and I wanted to share to the team broadly how we all had to dive in with a positive and energetic spirit.  A number of team members on the call looked up the word to insure that I wasn’t taking too many liberties with its application to our circumstances and indeed, I was pretty close in my usage!!
Alacrity: noun
cheerful readiness, promptness, or willingness:We accepted the invitation with alacrity.
liveliness; briskness.
After the call was finished I had some team members suggest that the message was appropriate for a broader audience in the company (not just the folks on the weekly call) and we crafted an email to share later that week, summarizing some key themes and sharing the idea of â€œalacrityâ€ as a key idea/attitude/approach that I was trying to adopt in this â€œwildâ€ time!  A wonderful surprise was the hilarious picture below, which was put together by two members of my team ( AJ & Pam !!) who wanted to â€œilluminateâ€ the idea in an easy to remember image!  There is no doubt that â€œBuddy the Elfâ€ is filled with many things but he certainly dives into the challenges he faces filled with â€œAlacrity!!â€ 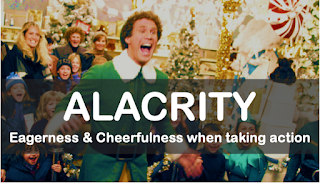 « Ten years later…. Bruce Paynter’s legacy is alive and pushing me forward! » Your first loss is your best loss”