A fresh start for spring… Again!

As many of you know, I have grown up in a family of keen gardeners.  My grandmother (Mama) raised a garden her entire life, and one of her biggest gardens was when she was over 90 years old!  My brother is a master gardener (and quite a “canner”) and my sister is often working in her garden on Bainbridge Island.  Part of this family tradition has included the passing down of tomato seeds across generations, and specifically passing along seeds from a tomato that Mama grew for decades in her garden in West Virginia. 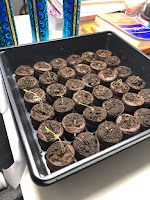 Every year I take the seeds form a healthy tomato and let them dry in a dark/dry pace over the fall and early winter.  In January I typically start those seeds inside and after a week or so the first seedlings start to appear… well those seedlings pictured above are Mama’s tomato seedlings that sprouted this past weekend.

While I have kept this tradition alive personally for over 20 years, this January it all felt a bit different.   We have been in “covid mode” since mid March of last year.  So many things have been pushed off to another time, another year…. so much of life has been put on hold.  With the millions of positive cases and hundreds of thousands of deaths tied to Covid here in our country, I am actually VERY grateful to have a life where we can put things on hold for a bit.  Yet this year as I pulled out the seeds from last summer and started preparing the seed trays, I became excited about the fact that I was TAKING ACTION on something for the future.  The garden was not going to be on hold…. Mama’s tomatoes are not going to be on hold…. summer will come and we will enjoy delicious fresh vegetables from the garden AND save some of those seeds for the future.   The cycle of seasons will hold and winter will go into spring and into the summer.  Never has that felt more vital and important!

In this dark and cold winter, faced by so many challenges, I hope that you can find something, maybe as small as a tomato seed, to take action on that will allow you to focus on and have an impact on for the future.  Yes there are dangerous days ahead and our need to continue to practice our covid safety protocols (mask wearing/social distancing/hand washing/etc.) has never been more important.  Its in that context that I share this story; the positive energy and the small “light” of hope that those seedlings are bringing to me this year are helping me see a brighter summer for all of us.

In honor and memory of Dr. King…. His “challenge” for our future!

Since my earliest postings on this blog in 2009, now 200+ essays ago, I have shared a deep inspiration (in good times and bad) that is rooted in the Nobel Peace Prize acceptance speech that Dr. King gave in Stockholm in 1963.  While Dr. King’s writings and speeches are broadly inspiring, I continue to find myself coming back to this same document, almost as old as I am, and I continue to find fresh encouragement and inspiration that is very timely and relevant to the challenges we are facing today.

For those of you who have not read his entire speech, click this link (www.nobelprizes.com/nobel/peace/MLK-nobel.html)

and take a few minutes to savor the entire document.

Today I want to focus on a specific paragraph of the speech and reflect on what it says to us today, a few days before the inauguration of President Biden, and Vice President Harris.

Over the past few weeks and months, certainly culminating on the attack at the Capitol on January 6th, I have been discouraged by the  ““isness” of man’s present nature” that Dr. King refers to in his speech.  Are we incapable as a country and a society to reach to “the eternal “oughtness”,” thus being doomed to a “starlight midnight of racism”?  These questions and doubts have been persistent for me, and maybe some of you as well.  As I write this essay, in the dark quiet of the national holiday honoring Dr. King, I re-read this passage and I am actually energized by another sentence….. “I refuse to accept the idea that man is mere flotsam and jetsom in the river of life, unable to influence the unfolding events.”  While these words were written almost 60 years ago, they are “on point” for all of us today/this week as we end one chapter of our American story and begin another!

Dr. King’s challenge for us is that we aren’t victims of history, we aren’t “mere flotsam and jetsom in the river of life” …we are actually active parts of CREATING the future for all humanity! Our actions matter and if we choose to act in paths that will create a more just, a more truthful, and a more peaceful society then our world will have a more hopeful future!  The eternal “oughtness” that he refers to is his challenge for us and our actions to CREATE a better tomorrow for all!

I wish off of you a peaceful and hopeful week as we move into a new chapter for our country, and I for one am working to be hopeful about the path ahead.  Take a few minutes this week to read (or re-read) some of Dr. King’s works and find fresh inspiration and challenge for OUR work ahead!

Over the past 11+ years since I started posting essays on this blog, I have often shared favorite family recipes as we head into the holiday season.  If you dig around, you will find recipes for MaMa’s buttermilk yeast biscuits, her “Corn Oysters,” Aunt Lorraine’s Jelly Tarts and my grandmother “Kuni’s Chocolate Cake.”  This December, with 2020 coming to an anxious, painful, challenging ( and maybe with a touch of emerging hope for vaccinations in early 2021,) I wanted to keep tradition alive with a favorite recipe from Jennie’s mother Jane…. the famous “Yum Yum Yams!”

Jane passed away almost 10 years ago, and we all miss her dearly.  I enjoyed cooking with Jane, and specifically enjoyed the Christmas dinners we made for the family over the years.  This year, I plan on replicating all of her dishes/recipes for our Christmas dinner and went looking for the old “Yum Yum Yam” recipe.  After a little digging I found the original, food stained recipe card ( the messy splatter on the card is a sign of well-used love for sure!) and I share it for all to try. 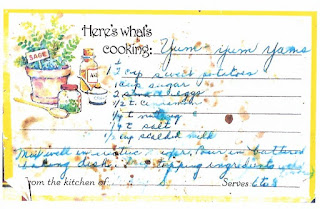 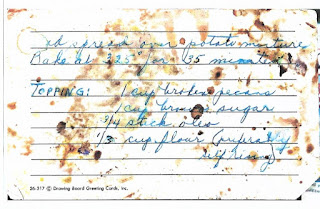 I wish for you a safe and healthy holiday, looking to better days ahead in 2021.  Enjoy Jane’s Yum Yum Yams and I hope it can become a tradition for you and your family for years to come!

While the recipe card above is awesome, the following is a typed out version for possibly easier/cleaner translation: