Don’t fight your life…” The wisdom of Swint”

This may sound like quite an unusual title, but recently I have faced some challenges that have brought this idea, and these themes into sharp focus.  As most of you know, I have had a business career that has spanned 35+ years and across those decades ( now that’s hard to fathom!) I have often travelled fro my work.  In this most recent chapter, as President of Bolthouse Farms, I literally commute regularly ( often weekly) from Atlanta Ga. to Bakersfield Ca. for my work…. not a very typical commute to say the least!  In this reality, I often have to take various routes across multiple airlines as part of my travel itinerary and at times the challenges of modern travel rear their “ugly” head.

Over the past few weeks, I have been on a tough streak, with multiple delayed flights, mechanical/crew issues, and major traffic delays that have caused significant challenges and frustrations.  Just this past week, after an extended drive due to a major accident on the Grapevine ( the mountain pass where “The 5” connects LA to Bakersfield) I arrived to a hotel near LAX to crash for an early direct flight home to Atlanta the next morning.  Arriving nice and early, successfully advancing my position, I got to the gate to be met by a 3 hour delay that culminated in a cancelled flight due to mechanical issues.  It had been a long few weeks at work and this felt like a kind of a breaking point.  The tension in the gate area was high, my patience was short, and for some reason in the midst of the tension I remembered back to a work associate at Coke named “Swint.”

I have no idea why Swint came to mind last Friday morning at LAX, but indeed he did!  We worked together at Coke in Baltimore back in the late 90’s, and Swint and his family lived near Annapolis Maryland.  I remember that Swint owned a boat and invited a few of us for a weekend get together that included a boat cruise/ride.  It was a very pleasant trip, a beautiful spot and I remember asking Swint if he was a long time boat owner.  He shared that this was the first boat he had ever owned and he had bought it when Coke transferred him and his family to the area from Atlanta.  I must have had a curious look on my face when he said this because he went on to share that he always tried to adopt the interests of the area where he was living, and since he was living by the water, he bought a boat.  If he had been transferred to Denver, they would have taken up skiing, and if they had been sent to LA they probably would have tried their hand at surfing!  In those days people were transferred regularly by Coke to various offices across the country ( and world!) and this idea of overtly “not fighting that life” and going with the “local flow” seemed to make a lot of sense! 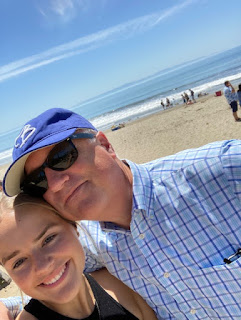 For some reason, “the wisdom of Swint” hit me at LAX on Friday morning at a tension filled gate 26B.  I immediately got on the phone with my trusted associate Cathy, and started coming up with a big “plan B.” Instead of staying at the airport for hours in the stress filled mess, we rebooked a flight for yesterday (Saturday) morning, and I went back to the LAX parking deck to get my car and drive 2 hours to take my sweet daughter Marie to lunch … pictured to the right!  We had a couple of hours together, and caught up on her life this spring at UCSB and just enjoyed our time together….truly a tonic!  I found my way back to Atlanta yesterday, and while I need to get re-energized for my flight west tomorrow (ugh) I am keeping Swint in my mind and will continue to look for ways to “not fight my life”… and maybe even find a few more “lucky surprise lunches” with sweet Marie!!

« Now is the time for Action and Condemnation! » It’s been a tough few months…. “no malignancy”!