I was struck with sadness, like so many other Americans, this past weekend by the loss of President George Herbert Walker Bush.  While he lived a long life filled with distinctive national and global impact, along with a deep loving commitment to family, his passing struck quite a 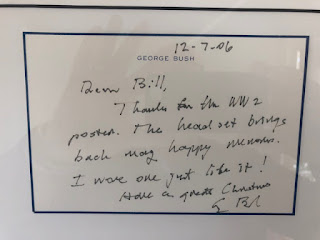 In 2006, while a senior executive for The Coca-Cola Company, I had the unique responsibility and honor to host President Bush at a U.S. convenience store industry conference that the company sponsored.  He was the keynote speaker at the event held in Phoenix, and my role was to “pick him up” in Houston (on a company plane), fly him to Phoenix, give a set of introductory opening remarks before his main-stage speech, facilitate the Q&A session, lead a VIP photo event and ultimately escort him home to Houston that same night.  What an itinerary!!  As I look back on it, I had a rare chance to spend 10-12 hours with the president, many of them in a private one-on-one setting.  What an honor!

As I think back on that remarkable day, I have had a flood of memories of unique events and vignettes from that day.  While I won’t go into exhaustive detail, I will share two stories from that day that I have found memorable and inspiring over the years.  The first came as we found our way to the “green room” behind the stage at the resort hosting the event.  The plan was for me to go on stage after the meetings’ lunch break, share some prepared remarks and introduce the President.  He suggested that I “not go too far away offstage” since we were going to do a Q&A session immediately at the end of his remarks. Stage direction from such a pro, … I was honored!  As I was thinking about this idea of “staying close,” he asked in a quiet tone if I could “help navigate” the Q&A session.  At first I didn’t understand where he was going until he pointed to his hearing aid and said that he wasn’t sure that he was going to hear 100% of the audiences’ questions and that maybe I could summarize and repeat the questions from the audience.  It was a very unexpected moment of vulnerability, and one that I will never forget.  I proudly played the role of “navigator,” the audience filled with interesting questions and the President totally in command of the moment.

A second memory comes from the flight back to Houston.  I had so many questions for President Bush and as we took our seats on the plane, I was eager to dive into my list! (What a surprise.)  He sat down and immediately brought out his brief case and opened it in his lap.  It was and “attaché “ style case, and opened in a 90-degree fashion.  He immediately took out a stack of personalized note cards and said to me that it was his practice to immediately write “thank you notes” for the hosts and key individuals from the event. He asked me to help him highlight the key notes that needed to be written.  We went over the event and he wrote out personalized notes to 4-5 key executives that had hosted the meeting and our visit to Phoenix. I had the honor to receive a few of those notes personally; an image of one is highlighted above.
I have so many memories, and took so many “lessons” away from that special day in 2005.  President Bush has left a significant legacy on our world, our nation and on yours truly.

I feel so fortunate to have had the chance to spend that day with him, so fortunate to be able to ask so many questions, and receive so many insights and in that same spirit I am thankful to have had a chance to pay my respects yesterday as he was lying in state at the nations capitol.
A chilly night with my friend Cathy, waiting in line with thousands of others all who came to Washington with the same wish as Americans (not Democrat or Republican, but as Americans) to pay our respects to an individual who had a significant impact on our generation.
While certainly a somber and poignant moment on that chilly night, I was somehow reminded by the President’s great sense of humor, his friendly nature and his infectious smile. These are memories that I will hold dearly for my lifetime and am grateful and proud to share with you as readers. 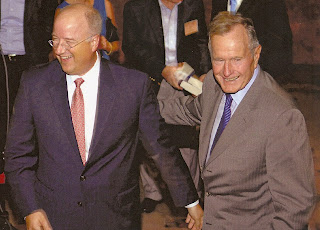