As many of you know, I am a bit of a history nut and enjoy looking back at history to look for clues or advice about how to face the challenges of today.  In past essays I have turned to many voices across time, including Plutarch, Ghandi, Dr. MLK jr, and many others to help illuminate and inspire; today I am turning to Wellington… the British general most well known as the general who defeated Napolean at Waterloo.

While famous for that final battle in 1815, a few years before he lead the British forces in Spain in what was known as the Peninsula Campaign, driving French forces across Spain ( the Iberian “Peninsula”) ultimately ending in the final battle in Waterloo Belgium.  As Wellington drove across Spain, the French forces would take up defensive positions in various small “cities” that were defended by ancient stone walls and attempt to stop Wellingtons advance.  In many off those situations, none more famous than the “Siege of Badajoz,” the British artillery would fire upon the walls until there was an opening, or a “Breach,” where one part of the wall had collapsed and was opened, the British infantry would “storm” into the “breach” and fight their way into the city, ultimately routing the defenders into a panicked retreat. 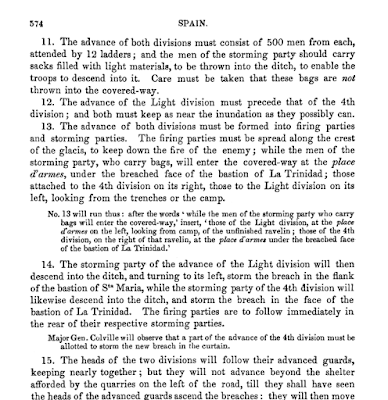 The notes above are taken from Wellington’s dispatches from that time, and are incredibly detailed in the plans and preparations for the soldiers preparing to “storm the breach!”  This wasn’t some sort of wild, unplanned assault but instead a highly coordinated, and well prepared plan to take advantage of an opportunity and to drive it to its maximum impact. ( the fact that he highlights the number of ladders and that the troops should bring “light materials” to be thrown into the ditch is an incredible level of detailed planning!

I have reflected back on Wellington this past week because of a competitive opportunity facing our company.  We have owned Bolthouse Farms for just over a year, and late last week we received word from our customers that a long standing competitor had announced their plans to close operations in the next 30-45 days!  What an incredible opportunity and in appropriate fashion we gathered our sales teams and within a few hours were having calls with key retail buyers to maximize our ability to capture the opportunity…. we were “storming the breach!”  The reality that this competitive news came a year after buying the company back from Campbell’s, not a few weeks after closing last summer, is so key because it gave us the chance to “come well prepared” to this moment! We had rebuilt the team broadly ( still more work to go of course but we are in great shape with a great group).  We have rebuilt our operational capabilities and our quality system, allowing us to run the plant at efficiency levels well above a year ago and has expanded our capacity levels to allow us to take on more business AND do so profitably….. and literally the list goes on!  We are “storming the breach” and have “come well prepared!”

While success is never assured, and we will have some ups and downs in “storming this breach,” this moment has reminded me of an important lesson; in business and in life you never know when an unexpected opportunity will present itself, but you are always able to build capabilities and become “well prepared” when the opportunity breaks to “storm the breach!”

« Where to find hope today….. » Through the lens of Gratitude